Environmentalism—in the form of a bureaucratic class of professional experts whose science-based & commonwealth-ethic views are respected by politicians, business-people and the public—is dead.

The reason is it dead is that professional environmentalists, at the Sierra Club and other big name enviro-action corporations, bought into the neoliberal ideology of “market-based” solutions to the problem that is nothing more than our utterly destructive economy. Since the “market” is controlled by those who profit it from it most, and these entities have the least interest in reforming the market, no “market-based solution” will ever reform, much less close down, the “market.”

Enviro-action corporations have lost political power, and the public’s interest, because there is no “market-based solution” to the “market”—it will always be more profitable for industries to pollute than not to pollute, and to see species die rather than save them.

The Sierra Club’s demise can be traced directly to its 2008 decision to receive tons of money from Clorox, in return for having its logo printed on Clorox bottles—an example of greenwashing that I will return to shortly.

Sierra Club got its greenwashing = corporate growth model from another enviro-action corporation, Environmental Defense Fund (EDF). In a press release EDF boasts that “In April 1991, after collaborating with EDF, McDonald’s announced major changes to its packaging and waste management.” Instead of attacking McDonalds, and the factory-farm/obesity-epidemic economy it profits off of, EDF convinced it to stop using styrofoam to package its products. No question the switch to recyclable paper was a good one: but, since the biocidal economy of global industrial/financial capitalism is the problem, EDF’s approach was ineffective on a structural level. As a result of its collaboration w/McDonalds, EDF made many influential friends w/in DC and Wall Street (who liked its featherduster, and not sledgehammer, approach to economic change), and became the envy of other enviro-activist corporations like Sierra Club. The result of EDF’s “market-based” approach is that the “market” always wins.

Holding the market-friendly position that “hydraulic fracturing is not going away any time soon,” EDF collaborated recently in a fracking-methane study with the University of Texas at Austin and with experts from the “Anadarko Petroleum Corporation; BG Group plc; Chevron; Encana Oil & Gas (USA) Inc.; Pioneer Natural Resources Company; SWEPI LP (Shell); Southwestern Energy; Talisman Energy USA; and XTO Energy, an ExxonMobil subsidiary.” Based on the results, EDF concluded that everything’s okeydokey, the present regulations for fracking wells are in no need of revision, and—to the relief of Exxon CEO Rex Tillerson who finds “environmental concerns as manageable and overblown”—there’s no need to stop the fracking:

“We know that immediate methane reductions are critical to slow climate change,” said Fred Krupp, president of EDF. “But we don’t yet have a handle on how much is being emitted. We need better data, and that’s what this series of studies will deliver. As we understand the scope of what’s happening across the natural gas system, we will be able to address it. We already know enough to get started reducing emissions, and thanks to the first study, we know that new EPA regulations to reduce wellhead emissions are effective. EPA got it right.”

EDF published its Exxon-supported methane report in Sept. 13, 2013 in the highly prestigious academic journal, the Proceedings of the National Academy of Sciences. The New York Times published a lavish praise of the report, and EDF’s conclusion:

“The reason the Environmental Defense Fund wanted this study done is precisely so that unassailable data, rather than mere estimates, could become part of the debate over fracking,” wrote Nocera. “You can’t have sound regulation without good data.”

Only a month later, EDF’s study and all its “good data” was undermined by another report published in the Proceedings of the National Academy of Sciences concluding that

“current inventories from the US Environmental Protection Agency (EPA) and the Emissions Database for Global Atmospheric Research [EDGAR] underestimate methane emissions nationally by a factor of ?1.5 and ?1.7, respectively. Our study indicates that emissions due to ruminants and manure are up to twice the magnitude of existing inventories. …. [Data] suggests that regional methane emissions due to fossil fuel extraction and processing could be 4.9 ± 2.6 times larger than in EDGAR, the most comprehensive global methane inventory. These results cast doubt on the US EPA’s recent decision to downscale its estimate of national natural gas emissions by 25–30%”

These Harvard/Stanford researchers find that “the United States may be emitting 50% more methane, a potent greenhouse gas, than the federal government had previously estimated.” Since EDF’s study did not account for this data, and relied instead on the flawed EPA and EDGAR data, its claim that present fracking-methane emissions regulations are working are besides the point: which is that methane emissions are out of control and barely regulated.

Though it now has “a handle on how much is being emitted” we must not expect EDF  to argue “that immediate methane reductions are critical to slow climate change” and fracking should not be permitted in the USA. Stopping XTO-Exxon’s poisoning of the air would not be a “market-based approach” to solving the big problem EDF pretends to solve.

Germany and France do not permit fracking within their national borders, but EDF works hard with oil companies, and the charitable arm of Walmart (the Walton Foundation), to prove that it’s good enough for us. Although it hires the best frackademics it can to appear otherwise, EDF’s pro-fracking “environmentalism” is a form of racketeering, conspiring with corporations to lie to us so the corporations can poison us and destroy our climate with impunity. The best market-based solution for this problem is to put it out of business. 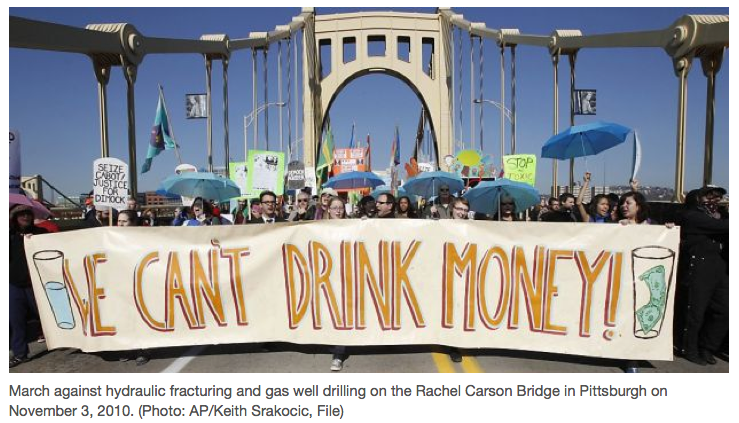 Today, the Associated Press has revealed how the EPA and state departments of environmental protection have, in cooperation with fracking companies, deliberately suppressed evidence proving that fracking contaminates water supplies. Look at the EDF website, and search google, and you’ll find  EDF has carefully avoided this issue, because it’s impossible for Exxon to produce studies that prove fracking doesn’t pollute water. 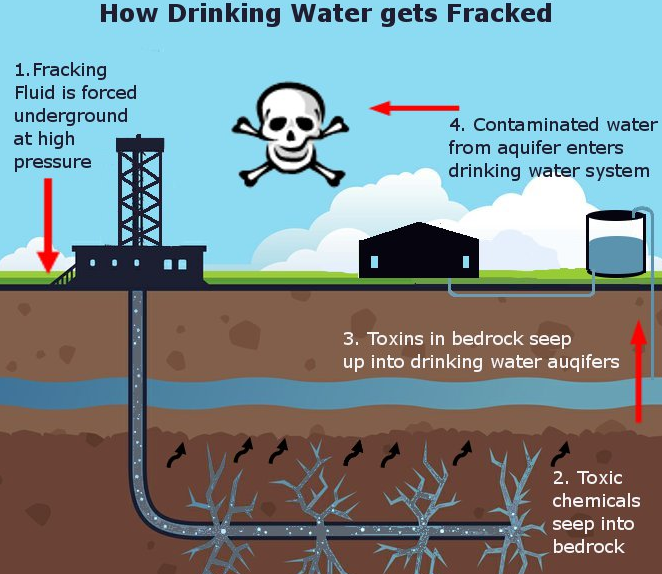 Returning now to the sad and sold-out Sierra Club that followed EDF’s lead in becoming “market friendly.” Clorox dumped it because its affiliation with the tainted enviro-activist corporation was a major business failure; as reported this April in the New York Times:

GREEN WORKS, Clorox’s line of environmentally friendly housecleaning products, is using Earth Day to introduce a fund-raising promotion on Twitter as part of an overall revamp of its marketing strategy.

The brand — introduced in 2008 with a controversial endorsement by the Sierra Club — has carried prices at least 20 percent higher than traditional housecleaning products and has been promoted with retailers’ natural and organic products.

In January, however, Green Works recommended that retailers eliminate its price premium and promote its products with traditional housecleaning products. The new policies will be phased in starting this summer.

Clorox’s contract with the Sierra Club, which involved a $1.3 million payment to the environmental organization, will expire this December; the Sierra Club logo, which has appeared on all Green Works packaging, will be eliminated from new, bolder packaging that will begin appearing this summer as part of the overhauled marketing strategy.

The new strategy — which Green Works’ brand manager, Shekinah Eliassen, said was meant to promote its products as being “affordable, effective, accessible and approachable” — no doubt stems from a precipitous decline in sales.

Sierra Club couldn’t sell clorox, and lost its credibility. Such as shame! But it has found new ways to increase its market share, and one of its most promising ventures is to give awards to universities through something it calls its “Cool Schools” contest. that judges a university’s “environmental sustainability.”

In my next post, I’ll explain how corrupt and corrupting the Sierra Club is to higher education. It awarded UConn #1 this year, at the exact moment UConn is expanding its main campus, taking what was an agricultural school surrounded by pastures and turning it into a massive, paved industrial research park and hotel and doughnut shop sprawl. Not only is all of this 1980’s-style porkbarrel development obviously exactly what planners define as “unsustainable,” it also requires the construction of one of the biggest drinking water diversions in CT’s history.