Yesterday, I had the pleasure of meeting some folks who are interested in learning about the little bit of the Dead Branch Brook in Westhampton that is home to endangered species. Thinking it might be of interest to many readers, I’ve decided to spread the joy—for isn’t it a special occasion, this sharing of scientific facts, this celebration of special and cherished life?

This screenshot is of a map of the northwest corner of Westhampton, I made using Mass DEP’s Oliver online mapping system. The balloon around and crosshatch on Dead Branch brook as it flows through Westhampton represents 2 federal-level designations: 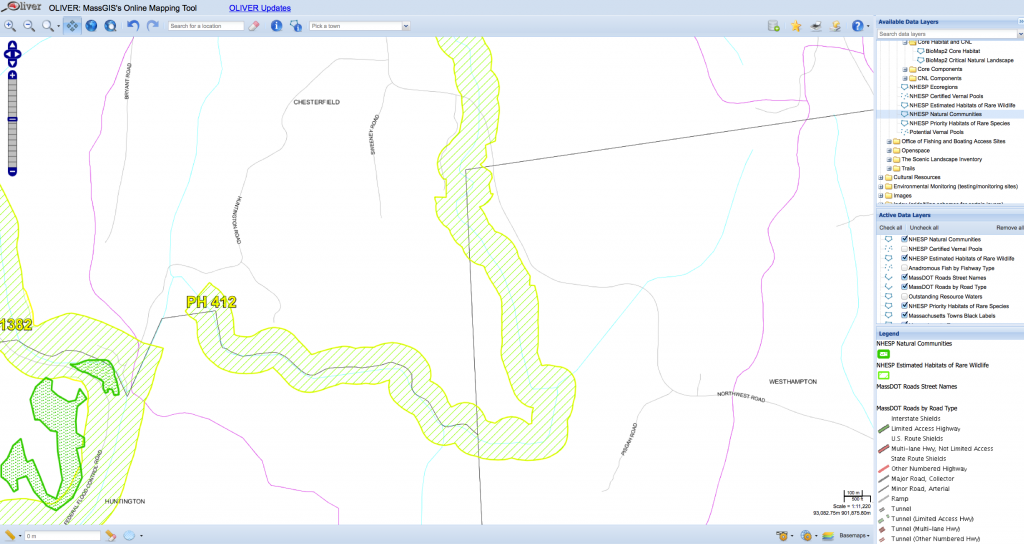 Westhampton is an average sized town that is relatively undeveloped and has, as a result, lots of natural beauty and  comparatively undamaged ecosystems. Yet in the entire town, there is no place that has such a concentration of highly valued and legally protected organisms, and ecological systems and processes, as the balloon-shaped protection area that you see here. 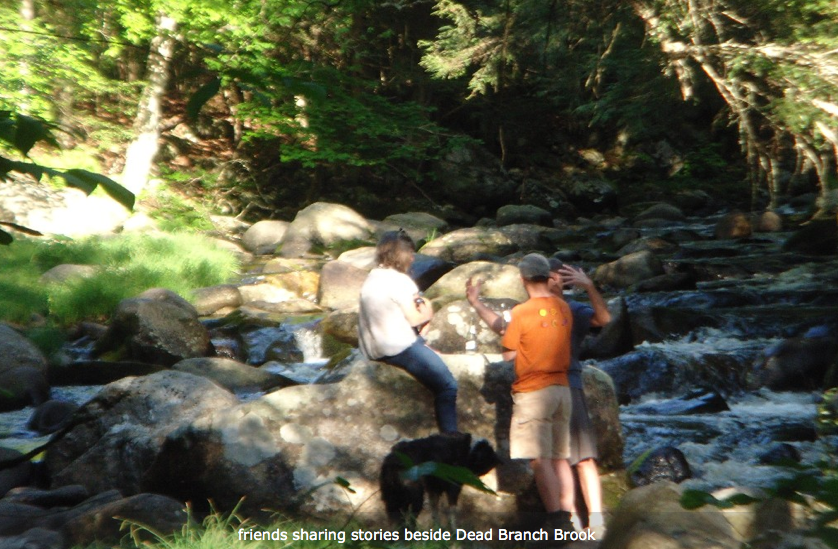 There are only two other brooks in Western Massachusetts that have as much life as the Dead Branch, I’ve been told by more than one US Fish and Wildlife anadromous fish restorationist; so it is no surprise that the Dead Branch is officially listed by DEP as a cold water fishery, a designation that is found also in the the Statutes of Massachusetts; please take a look: 314CMR 4.06. Because it is in the statutes, the Dead Branch is a place where citizens can request police action if they find that it is being mistreated. They can hire legal assistance, and bring a case to court, to defend it. 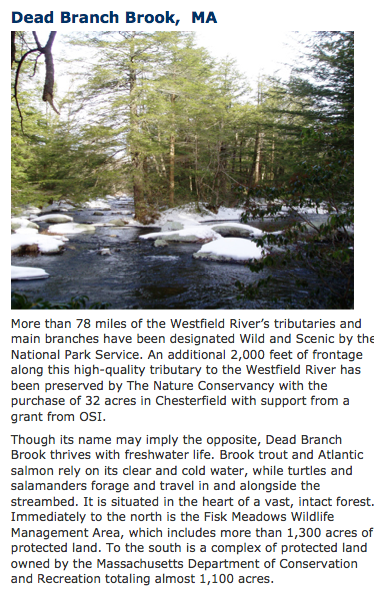 But such mistreatment will not occur, because the Westhampton Conservation Commission is specifically charged with the duty, and is fully empowered, to prevent the slightest bit of damage to it. With very little effort, they can locate and at their meetings cite and celebrate the many references to the Dead Branch in regulations and policies of several state and federal agencies, including even the pavement-minded MASSDOT which states: “This habitat is termed ‘Essential Fish Habitat’ (EFH), and is broadly defined to include “those waters and substrate necessary to fish for spawning, breeding, feeding, or growth to maturity.” What’s really interesting is that because of its legal status, this land is your land—the Dead Branch is highly valued not just by the particular land-owners who hold title to this or that part of it, but also of our Commonwealth.
The Dead Branch starts in the Goshen highlands and debouches into the East Branch of the Westfield River, which is federally recognized, regulated and managed as a Wild and Scenic River; and it is this connectivity—this relatively-undamaged mountain-to-valley habitat corridor—that makes the Dead Branch so highly prized by those who live by or near it, those who visit it for recreational purposes, those who study it because it is a biodiversity hotspot, and those who regulate it because it is incalculably valuable for the use and enjoyment of present and future generations.
So even though just a tiny bit of the Dead Branch goes through Westhampton, its status as habitat corridor—a sort of highway for wildlife as they travel from valley to mountain and viceversa—that makes the Dead Branch a regional resource, and any damage done to it in Westhampton will be damage done not just to local neighbors, but also to us, citizen-stakeholders on the regional, and state, and federal level. Though most folks don’t know any of what I’ve just shared, is it not obvious that the Dead Branch is lovely and worth loving?
Our confidence that Westhampton Conservation Commission will prevent damage to the Dead Branch increases when we read this in Westhampton’s Open Space Plan, which conservation commissioners are aware of and strive to execute:

Located in the northwest corner of town, the Dead Branch is a cold, shady, rushing river with dramatic rock outcrops that flows into the Westfield River drainage. Bordered by hemlock and a mix of deciduous trees, the river provides habitat for native brook trout, Atlantic salmon and several other species of fish. It also supports one species of rare dragonfly and is the only location in town where freshwater mussels are known to occur. Along its marshy borders are a few plants that are unusual in town, including pickerelweed, sweet gale and in one small area, pitcher plants, leatherleaf, sundews and other species characteristic of bogs. The Nature Conservancy (TNC) developed the Westfield River Highlands Program in 2003 to join community efforts to protect and responsibly manage the watershed’s forests and rivers. TNC is actively talking with Westhampton landowners in the Dead Branch watershed, and portions of the Connecticut River Watershed as well about protecting their land.

The Dead Branch is so prized by the nation’s largest, most respected land conservation nonprof, the Nature Conservancy, that it recently purchased land in Chesterfield upstream from Westhampton. In November of 2011, the Gazette reported that then congressman John Olver hiked part of the Dead Branch with senior staff of the Nature Conservancy; here’s a bit of that heartwarming article:

Markelle Smith, a land protection specialist with the Nature Conservancy, said the [Dead Branch conservation] property is a key parcel due to the “amazing amount of biodiversity.”

As well as being home to deer, moose, black bear, coyote, red and gray fox, beaver, river otter, fisher, freshwater brook trout and Atlantic salmon, the land is critical habitat for wood turtles, a species of special concern, as well as several rare dragonfly species, according to Smith.

A recent survey conducted by aquatic biologist Ethan Nedeau of Amherst-based ecological consultancy Biodrawversity, reported that the area also provides the most promising freshwater mussel habitat in the entire Westfield River watershed. According to the Nature Conservancy, the watershed boasts some of the healthiest waters in southern New England.

Olver noted that because of development pressures along the Westfield River, it falls to the Fish & Wildlife Service to find the resources to preserve what he termed, in a statement, “one of the most fragile ecosystems within western Massachusetts.”

The acquisition of this land helps establish a significant north-south conservation corridor that helps protect Dead Branch Brook and Long Pond, both of which are located within the newly preserved land off East Street. It abuts the Nature Conservancy’s Bisbee preserve, located on the opposite side of East between East and Main streets, and also provides a connection to Fish & Wildlife’s 580 acre Fisk Meadows Wildlife Management Area. Fisk Meadows is situated on the other side of Main Street, and also abuts the Bisbee preserve.

“This gives species greater ease of movement in a bigger forest block,” Markelle said. “And when you add in the Westfield river, it becomes an extremely important place to protect.”

Because it is, in the words of the former congressman, “one of the most fragile ecosystems within western Massachusetts,” the Dead Branch

is, in the words of TNC, “an extremely important place to protect.” Wow—here is the mussel research report which concludes: “Protect the only known viable river population in low-gradient sections of the Dead Branch.”

I suppose there’s no point in multiplying the examples and references that attest to multiple resources values of the Dead Branch Brook, or that underscore the reasons why it receives legal protection on local, regional, state and federal levels—but I can’t resist sharing another Gazette article, even if it repeats a few things you already know now.

On May 1, 2013, the Gazette reported that the Dead Branch is now officially part of the Silvio Conte Refuge, which means that conservationists and regulators have officially connected the little piece of it in Westhampton to the much larger biosystem we call the Connecticut River:

As Berkshire Hardwoods winds down its operation after 25 years in the timber-supply business, officials with the Silvio Conte National Wildlife Refuge are busy planning the future of near 100-acre property located at 73 East St.

“We don’t have all of the details right now, but we know it will be open to public for activities like hiking, wildlife observation, hunting and fishing,” said Andrew French, refuge manager. No date has been set when the land will be open to the public.

When the U.S. Fish and Wildlife Service purchased the 17-acre property in December, Poirier was permitted to stay on the land for one year so he could fulfill obligations to clients and have time to dismantle his business.

The land is located southeast of the center of town, off East Street.

According to French, the first purchase of 80 acres cost less than the 18 acres bought in December because there were buildings that came along with the second parcel, which included the sawmill, a drying shed, office building and drying kiln.

“We will at some point remove the structures. My hope is that they would be repurposed and put to use here or in a different location,” French said.

He said eventually the wildlife service would like to put in a parking area, an informational kiosk, nature and birding trails, as well as trails that are compliant with the Americans with Disabilities Act.

“I haven’t heard any specifics about exactly what they plan to do, but I am thrilled and very pleased that the land will be part of the refuge,” Bill Joly, a Chesterfield Conservation Commission member, said.

The first 80 acres of land added to the Silvio O. Conte Refuge established an important north-south conservation corridor that runs through the eastern side of Chesterfield, protecting Dead Branch Brook as well as Long Pond. The land also abuts the Nature Conservancy’s Bisbee preserve , and provides connectivity to the Department of Fish and Wildlife’s 580-acre Fisk Meadows Wildlife Management Area.

The 17 additional acres are connected to the first 80 acres the refuge acquired.

The mission of the Conte refuge is to conserve the abundance and diversity of native plants and animals and the habitats located in the 7.2-million-acre Connecticut River watershed in Connecticut, Massachusetts, New Hampshire and Vermont.

“What we are really trying to do with the Silvio O. Conte Refuge is facilitate connectivity within the larger conservation area,” French said. “This is like putting together a big puzzle that is really complicated and the pieces are all different sizes and shapes.”

By slowly stitching together protected areas of land and habitats, natural corridors are created connecting previously fragmented tracts of land, allowing greater ease of movement for a variety of wildlife.

The newly protected region in Chesterfield is home to deer, moose, black bear, coyote, red and gray fox, beaver, river otter and fisher. Freshwater brook trout and Atlantic salmon can be found in the clear, cold water in the Dead Branch Brook, according to the wildlife service.

The land is also critical habitat for wood turtles, listed by the state as a “species of special concern.” This category refers to native species that have suffered a population decline that could threaten the species if allowed to continue. The listing also applies to species that occur in small numbers, have restricted distribution or require specialized habitat, all of which increase the possibility of becoming a threatened species in Massachusetts.

According to a recent survey of freshwater mussels commissioned by the Westfield River Wild and Scenic Advisory Committee, the Lower Middle Branch and the Dead Branch provide the most promising mussel habitat in the entire Westfield River watershed.**

OH—one last thing! You are invited by Westhampton’s Open Space committee to explore what you have just read about; this is from their Open Space Plan:

Dead Branch State Forest- The Commonwealth of Massachusetts Department of Conservation and Recreation (DCR) holds 48 acres of permanently-protected forest land off of Northwest Road on the northern border with Chesterfield. The parcel, open for public recreation, is accessed through the Chesterfield portion of the property on South Street. 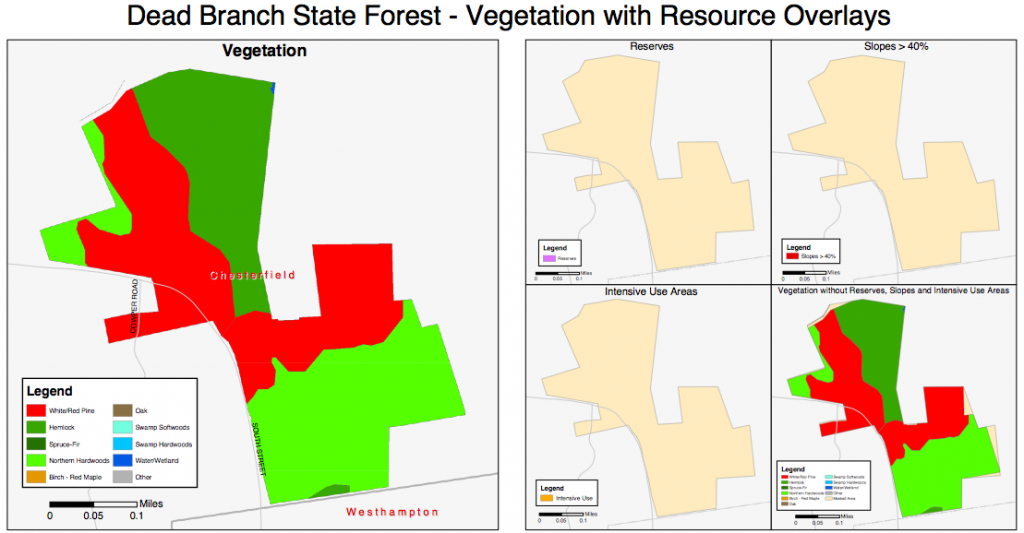